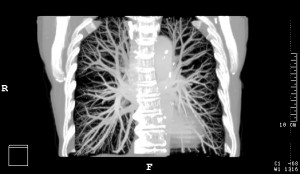 Affordable Medical Imaging is providing lung scans that may determine if you have lung cancer well before a symptom first appears. Often if and when a symptom does present itself the disease is well beyond repair. So do not wait if you fall into the high risk category listed below.

Lung cancer remains the leading cause of cancer death for both men and women in the U.S., with more than 150,000 deaths per year and a five-year survival rate as low as 15%. CT screening is the only path — outside of never smoking to begin with — that has shown significant potential to reduce lung cancer’s toll.

The association’s interim guidelines reflect recent evidence indicating that most lung cancer deaths can be prevented when detected at an early stage with CT. Recent research from the U.S. National Cancer Institute’s National Lung Screening Trial (NLST) found that low-dose CT can reduce mortality by at least 20% compared to chest x-ray, and other reports have pushed the estimated mortality gains even higher.

The American Lung Association’s guidelines, developed by Dr. Jonathan Samet and colleagues on the association’s lung cancer steering committee, follow the NLST recommendations for low-dose CT scans. To qualify for screening under the interim guidelines, individuals must meet the following criteria:

If you fall in the following category do not wait and schedule your lung scan today. You do not need a prescription all you have to do is call us and make an appointment, (727-896-0000)

“This is good news,” Dr. Ella Kazerooni, professor of radiology at the University of Michigan, told AuntMinnie.com. “I was a little surprised by the timing since the NLST results came out last fall — and have actually been out for considerably longer than that — and the [NLST’s] cost-effectiveness analysis is still not out. But the American Lung Association is clearly following on the heels of the National Comprehensive Cancer Network, which last fall was the first major professional organization to come out with a recommendation for lung cancer screening with CT in the same population in terms of age and smoking history that was enrolled in NLST.”

There has been a recent cost-effectiveness analysis, but not from the NLST. Earlier this month, an article in Health Affairs concluded that lung cancer screening for CT would be highly cost-effective, but the analysis was from the third-party payor perspective rather than a public health recommendation. As a result, screening advocates are still waiting for the NLST’s cost-effectiveness analysis, which is being put together by Dr. William Black and colleagues at Dartmouth University, Kazerooni said. That paper will be ready for journal submission by late spring or early summer.

“We’re very hopeful that [lung cancer screening] will come in line with the cost of other screening tests,” Kazerooni said.

Finally, last December one of the major third-party payors, WellPoint, said it would begin paying for lung cancer screening with CT in some of its products, “which is another good data point along the way to help build the case with other payors,” Kazerooni said. But the biggest remaining hurdle is working with the U.S. Centers for Medicare and Medicaid Services (CMS) and the U.S. Preventive Services Task Force (USPSTF) to review their guidelines, hopefully in favor of screening, she said.

In its report, the American Lung Association notes that while CT screening may save lives, screening for lung cancer is not recommended for everyone due to many known and unknown risks that may be associated with the screening and subsequent medical evaluation and follow-up. Never starting smoking and quitting smoking remain the best way to prevent lung cancer, said Dr. Norman Edelman, chief medical officer of the American Lung Association, in a statement accompanying the release of the report. People should also check their homes for excessive levels of radon, which can increase the risk of lung cancer, he said.

“Our hope is that this report will guide the public on this very important personal and public health issue,” said Dr. Albert Rizzo, board chair for the American Lung Association. “We believe that the report and the educational materials that will stem from it will be invaluable to the tens of millions at risk for lung cancer.”